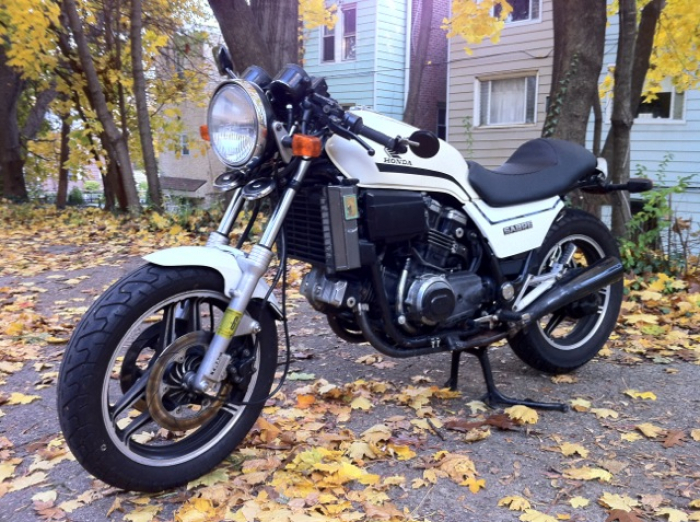 I first started getting seriously interested in motorcycles when my friend and band-mate Geoff showed me his in 2008. In early 2009 my wife and I had just bought our first house, which had a garage. I fancied getting a vintage vehicle with character for the joy of disassembling it, cleaning it, learning about it and just making it my own. When I lived in Dorset, England from 2001 to 2002, I bought a Russian Lada Niva 4×4, a car I had been admiring since my parents moved to France. But I’ll leave her story for another time. I thought about getting another Niva, but they aren’t easy to find, the closest being in Canada. So I then started considering an AMC Eagle 4×4.

As I started doing more research, I began to think more about motorcycles. Another car would be expensive to overhaul and have low fuel economy, not to mention a negative environmental impact. Although more dangerous, mostly due to the negligence of car drivers, a motorcycle would be less expensive to repair and maintain, have better fuel economy and generally have a positive environmental impact as I planned on using it for commuting. So, that’s where it all began.

In the fall of 2009, as Geoff had informed me, I enrolled in the free(!!!) PENNDOT Motorcycle Safety Program which provides in-depth motorcycle riding safety and hands-on riding experience, even if you don’t own a motorcycle. If I was going to start riding a motorcycle, I would be as safe as possible and taking this course was my gateway to being a safe motorcyclist. With successfully passing the end of class tests, on receives a motorcycle permit.

Once I had my permit, I hopped straight onto Craigslist, looking for my first ride. After just a couple inquiries, I found a promising bike about an hour away in New Jersey. I visited the seller and test drove the bike, a 1985 Honda V-four 700cc Sabre. Luckily, I already knew about Honda’s trustworthy V-fours from previous reading and research. Although the bike was a pretty sore sight for the eyes, I saw its potential and for the price I felt comfortable and uninhibited to dismantle and explore it’s construction. Not to mention, the seller offered to deliver it to my house. It was a done deal.

With my Clymer manual in-hand and a limited set of tools, I set to the job of seeing what was what with my new piece of machinery. I was shocked by my first few discoveries. First of all, the air filter box had a mouse nest in it. Luckily no mouse, but one had definitely been there. My next surprise was that a piece of plumbing pipe was used for the handlebar, threaded on one end. Other issues included a missing speedometer/odometer, missing mufflers, a dented gas tank, piecemeal headlight and blinkers and no center stand. I had my work cut out form me, but a grin was on my face.

Other than bringing the bike back up to good working condition, I also wanted to modify it. I like the low profile and naked look of cafe racers so that was one inspiration. But when I told another band-mate, Dan, about my Sabre motorcycle, he immediately said “Light Sabre”. And so was the theme for my bike realized. I registered the license plate “LTSBR” and decided on a Stormtrooper/Sandtrooper look since I have always liked their basic color scheme; white panels and main structures; black parts and joints underneath; orange accents.

Here’s a recap of what I worked on starting from the front of the bike working backwards.

The front-end:
The tires were cracking so they were replaced. I repainted the fender white and added a strengthening fork brace since the original was known to be weak and prone to cracking. Fork seals were replaced and I eventually ended up having to replace the forks entirely since pitting on the chrome was causing the new seals to leak. I first replaced the headlight with an original part but later decided to go with an oversized headlight to be a bit more in the style of a cafe racer. I added clip-on handlebars to further achieve the cafe look.

With the modified handlebars, the original instrument cluster’s profile stood too proud for my liking so I cut it in half, the top portion consisting of the gear indicator and temperature gauge, the lower portion consisting of the warning/status lights and ignition key recess. I then remolded the missing or damaged edges of the two clusters with plasticine and created silicone molds reinforced with a plaster shell. Once set, the parts were pulled from the mold and the plasticine removed from the original parts and placed back in the mold. I mixed pourable plastic with UV resistant additive and poured it into the molds, covering the negative space which previously held the plasticine. I then created a custom bracket to hold the new light and instrument cluster arrangement.

The body:
The gas tank was stripped, dents repaired and a pin-hole welded (thanks Danny for helping with the latter!). I repainted the tank white and added black stripes mimicking the lines of the original paint. A black reflective Honda wing decal was added on either side of the tank above the stripe. Side panels were also replaced and repainted. Although it departed from the stripped-down idea of a cafe racer, a number of other missing panels were replaced, my thinking being that these parts would be more in-line with the Stormtrooper theme (such a dork).

The seat that came with the bike was in bad shape so I found another with better foam and had a custom orange and black vinyl cover made, again to go with the Sandtrooper theme. I eventually decided to reshape the seat pan and remove the rear cowling to alter the silhouette. I used the damaged seat that came with the bike, reshaped the pan with fiberglass, added and reshaped the foam and cut a new cover from carbon-fiber-look vinyl.

The back-end:
I removed the rear cowling which included the tail light and found a nice LED tail light as a replacement. This required a bracket which I created to hold it and the license plate. The mufflers were also non existent so original parts were added although I rather fancy a four-to-one exhaoust system, but performance adjustments to accommodate that might be a bit beyond me.

Other stuff:
A couple of the foot-pegs were replaced. The battery was replaced with a Yuasa battery. Some wiring was redone with the modified instrument cluster, headlight and tail-light. All spark plugs were replaced. Carburetors were cleaned and floats adjusted. Mouse nest removed and air filter replaced. Missing center stand was replaced.

So there we have it. My first adventure in motorcycle maintenance. I certainly have learned a lot and am pretty happy with the result. I always look forwards to wheeling her out of the garage and enjoying the ride as we cruise along.